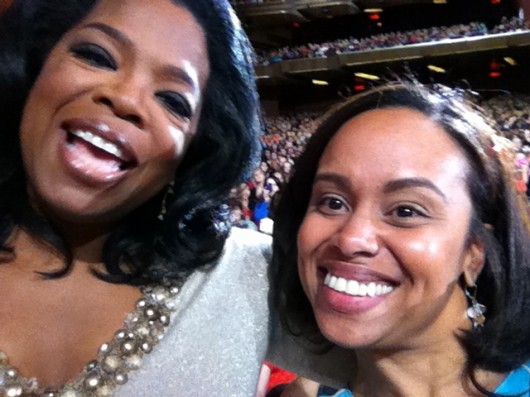 If you would’ve asked me if I thought I’d ever meet Oprah, surprisingly I would have responded with a confident “YES!” Since my diagnosis, I’ve never allowed many things to stand in the way of my dreams. Anyone who knows me will tell you that I had been talking about it for the week leading up to this memorable day. I had no master plan, no hook-ups, I just knew…

It all started when I received a general e-mail notification from Oprah.com sent to all it’s subscribers advising us about an upcoming live taping of the Lifeclass series at Radio City Music Hall in New York City. Immediately I plotted with my co-worker to enter the lottery for tickets and kept the fact that I had done this to myself. I wanted no negative energy tampering with my chances. Soon after I got the message that I was selected. While I was excited about winning, I was a little bummed that I was to sit in the upper mezzanine on the third level.

Two weeks later, I received another notification asking me some really difficult questions. I made 3 attempts to respond to them but had to stop because I kept getting stuck, then finally I just got it done. These were not easy things to put into words.

Next thing you know, I get another communication indicating that due to some production changes, I was moved to the orchestra seats on the first level. I guess I did a hell of a job on those questions! From that point on, I really got serious about setting my intention and visualized myself talking to my Shero, Ms. Oprah Winfrey. There was not a night I didn’t pray for our long-anticipated meeting.

When I went to pick up my tickets the day before, I was given a bracelet that other audience members on line did not. Upon arrival to the historic venue, I was not required to wait on the ridiculously long line with people from all over the world. Then I was ushered to the second row in the closed off section in front of the stage. The topic was spirituality and her guest was the amazing, Deepak Chopra. Perez Hilton also made an appearance.

Before I knew it, Oprah came by to say hello during one of the show’s breaks and I knew this was my opportunity. With the look of fury in his eyes, the security guard saw me preparing and quickly warned me that I was not to request any pictures. What he didn’t know is that the phone was ready… I was ready. As Oprah spoke to the ladies in front of me I stood up, looked into her eyes and simply whispered “thank you” (for so many things that it would have been impossible to list) and then proceeded to ask for a hug. She lovingly accepted and I could feel the love radiating from her heart to mine. I then asked her for a picture and after she personally made a few adjustments to the positioning of the camera, she smiled and brought me closer so that both us would be captured in the image. You could tell how happy I was by looking at the picture. I can only recall her posing for one other of the 5000 audience members.

Not realizing that my friends were watching it live on the web, my phone went bananas! So many people were trying to contact me at precisely 3:56pm, it literally shut off. It took me a while to recover from the magnitude of what had occurred. I cannot remember a single thing that happened in the moments that followed. As I drove home with the radio off, I just cried. If you remember only one thing from the post, let it be this… no one and no thing can stop you from your dreams. As Deepak Chopra said, the only moment you have is NOW!